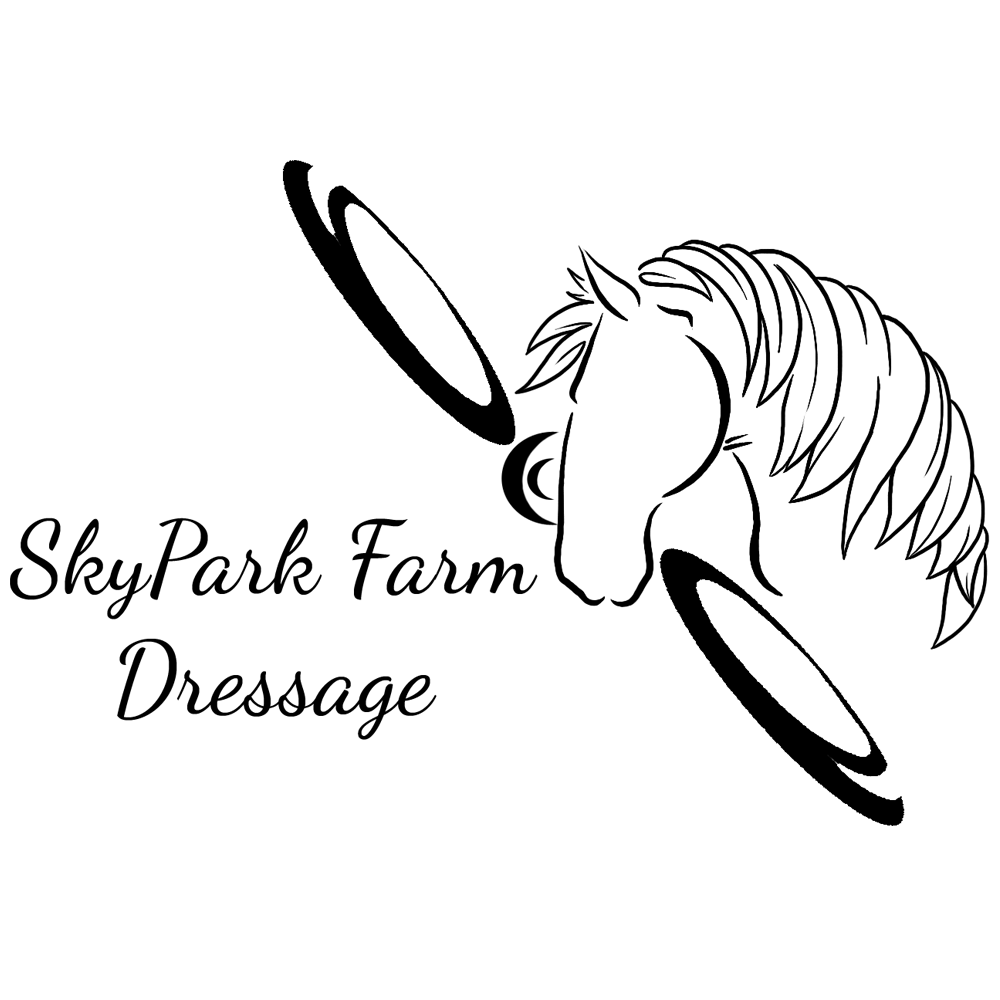 ◦ Competent in handling and care of horses.

◦ Participated as a youth in the local 4H Horse and Pony Club from 9 to 21 years of age.

◦ Competed and schooled in the sport of Hunter/Jumpers for 18 years.

◦ Competed and schooled in the sport of Dressage for 20 years.

◦ Perpetual student and train with top trainers and clinicians throughout my life.

◦ Successfully coached many individuals riders, and teams to competition success.

◦ I have given lectures and demonstrations throughout my career.

◦ Regularly compete throughout the levels of dressage and have achieved many successes and currently working towards Silver Medal and Silver Freestyle Bars.

◦ Recipient of many All-Breeds Awards.

I have been a horsewoman for more than 35 years.  I am a dressage trainer, competitor, instructor, and clinician, with emphasis given to the classical dressage principles. I owned SkyPark Farm Dressage, a small private farm in Bellefonte, Pennsylvania, minutes from the Penn State University main campus, for about 30 years.  I am a successful and active dressage trainer and competitor and have gained a reputation for good horsemanship and skillful riding by achieving repeated successes with many different horses. I am a serious and dedicated trainer and rider with high standards.

Coming from a western riding background as a youth, and a jumping background through my teens and twenties, I have acquired a wealth of experiences to draw from. I especially enjoy working with young horses and I have an extensive background and knowledge in training. My training shows in my horses’ confident, willing attitudes as well as their physical development and performance. Horses trained by me have a high degree of rideability while also being developed to the best of their athletic abilities.

A love for riding began as a small child.  I got my first pony at the age of seven when my father traded in a pony, cart, harness, and tack for a used car.  I joined the local 4-H Horse and Pony Club at age 9 where I participated in Western Riding events and Games.  At the age of 13, I started taking jumping lessons from Jane and Dave Flynn of Eastwood Farms, in Bellefonte, PA.  My mother bought me a show hunter and I began competing Hunters.  During my first two years in college, I successfully competed on the Pennsylvania State University Equestrian Team.  During my twenties, I successfully competed Jumpers and worked regularly with Dave Flynn of Eastwood Farms in Bellefonte, PA, Linda Will of Hunt and Hackaway Farm in Milroy, PA, and I cliniced regularly with Chris Kappler who worked for Hunterdon at the time.  In my late twenties, I began pursuing dressage and started working with Barbara Horwith of Womelsdorf, PA, with whom I studied all the movements through Grand Prix.  From there I began studying with Jill Hassler-Scoop who then encouraged me to become an instructor.  She mentored me during my first year of instruction.  I worked with Jill for five years until her death.  I also worked with Thomas Ritter (8 years), Fred Weber (6 years), and I continue to work with Paul Belasik (8 + years).  I have enjoyed a long, fulfilling career in the horse business and have owned my own equestrian facility in Bellefonte, PA for thirty years.  I continue to train, instruct, clinic, and compete.

Just as sound fundamentals are essential to good riding, so is a program of continuing education.  As a perpetual student of the horse, I have been fortunate to train with some of the finest instructors in the US and Europe.  I draw upon this diverse background of techniques, styles and concepts while working with each horse and rider.  I have always felt an obligation to my students to pass along the knowledge gained from this experience and training. My training experience comes from many different instructors and clinicians over the years yet all have maintained the same priority and goal of the correct development of the horse. Trainers that have encouraged and helped me along the way include:

My strong desire and love for learning, along with my open-mindedness, have been continuing distinguishing traits and one of my many strengths throughout my entire career. I am always seeking new learning opportunities for myself and my students through the USDF and other associations, as well as seeking out other opportunities in other miscellaneous events.

I have been an advocate and supporter of my Local Aviation & Horse Community since 1990 to Present Day.  I am an active participant in the development of aviation and horse events and organizations.  I greatly enjoy supporting grass root organizations, hosting local events and encouraging growth opportunities for individuals and groups.  I have held numerous educational events at my farm, have given demonstrations and lectures to various groups, and have been an encourager and a champion for the local aviation and equestrian cause.

I love teaching and have the heart of a teacher.  Encouraged and mentored by Jill Hassler-Scoop, I enjoy teaching almost as much as I enjoy riding and training. I think that teaching is like riding, a journey in which one is always growing and learning. I began my journey as a ski instructor at Vail, Colorado, in the early 1980's and became a dressage instructor at the urgings of Jill Hassler-Scoop in the late 1990's. Jill mentored me in my first year as an instructor and I also went on to get her ARIA certification in 2000 in Level II Dressage and Hunt Seat.

One measure of success comes from my student’s successes.  I have coached individuals, intercollegiate teams, United States Pony Club, and 4-H Champions.  With an emphasis on the sound basic training principles of traditional horsemanship, I have trained novice riders with green horses to become successful in the show ring.  Numerous students have won championships at the local, regional, and national levels.  I have coached numerous Quadrille and Drill Teams including coaching the Lion Country Pony Club Quadrille to win the National Championship.  I hosted and coached the Penn State Dressage Team in their inaugural year.

I have always been surrounded by music. My love of music was inspired by my grandfather, Jacob Fox, who had his own dance band called the Jacob Fox Orchestra, and by my mother who played piano for her father in his dance band. I studied Classical Piano for nine years. I accompanied several choirs and soloists during her earlier years. I also studied Classical Voice Training for two years and have performed in choirs and a few solo performances. My daughter, Jessica, studied the alto and tenor saxophone for several years and is currently studying the cello.

I helped establish the KDCTA Drill Team in 1996 with its first 12 riders. I coached, choreographed and edited the music for the Team for its first several years. I, since then, have choreographed many Pas de Deux and Individual Musical Freestyles.

I have been a successful clinician and have also had great success in teaching Musical Freestyle Workshops.  I have edited the music and designed the choreography for many Individual Freestyles, Pas de Deuxs, Quadrilles and Drill Teams.  Many of which the riders have gone on to win many awards with the freestyles that I developed.

My competitive success began as a youth in the 4-H Horse and Pony Club.  I competed in 4-H in the western riding and gaming events.  At 13 years old, I began competing Hunters and went on to have many successes as a junior.  I rode successfully competed Jumpers in my late twenties.  I studied dressage at the end of my twenties and have been a student of dressage ever since.  Over the years, I have studied, in great detail, work on the longe, in-hand work, long lining, and dressage movements through the Grand Prix.  I have enjoyed many competition successes with various horses and have currently competed through 4th Level.

I regularly compete with my horses throughout the levels of dressage and I have achieved many successes and multiple championships. All of my accomplishments have been earned on horses that I have trained and developed mostly by myself.  I am a USDF Bronze Medalist and am currently working towards my Silver Medal, and Bronze and Silver Freestyle bars.

True to the traditional training principle of calm, supple, straight, strong, and forward, I use a system of training with my horses that one step builds upon the next. I suggest, test, explore and seek cooperation, always reinforcing successful efforts, which build confidence in the horse. I believe that classical training produces a horse that is balanced, athletic, responsive and confident, thus making him more enjoyable to ride and in turn, he enjoys his work.

The satisfaction I experience while training a horse through the levels is difficult to put into words for me.  Whether green or advanced, I always focus on the solid basics and correctness of the work.  I am a very focused trainer and I seek to let each horse perform to the best of their ability regardless of breeding or conformation.  I have worked with many different breeds of horses.

2010 Qualified for USDF Regional Championships at First Level on Milano